11 Factors that Influence the Forex Market 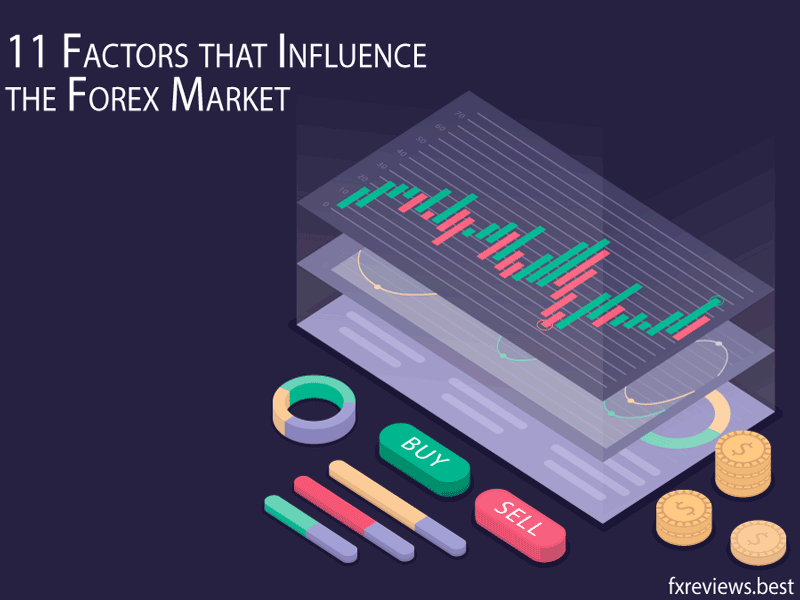 The forex market of a country and its performance is an excellent indicator of any nation’s economic health. If a country’s forex rate is moving in favour of the domestic currency, then this means that the country would be able to exchange more of another country’s currency. Confused…? Don’t worry! We would be clearing all your doubts here only.

In this post, we would be covering forex, it’s functioning, and the factors which affect the forex market. These determinants are duly explained and analyzed. Read them carefully and start trading

As the name suggests, foreign exchange (or forex) is the exchange of currencies between two or more countries.

When a country receives more foreign currency and spends less of the domestic money, then it strengthens the foreign exchange rate of the nation.

Some of the ways to make local currency strong are more exports, fewer imports, encouraging tourism, outsourcing more services, etc. Let’s understand this with the help of an example.

Suppose you want to travel to another country, let’s say Japan. Then, obviously, they would not be accepting your country’s base currency in their local market.

You need to exchange your money with the currency of Japan, i.e. Yen. After only this exchange, you would be able to purchase anything or pay someone there.

Here, you exchanged your currency for the Japanese Yen, which would bring more foreign capital to their country and their exchange rate will move upward.

But, this was not the only thing that would influence the foreign exchange rate of a nation. Tourism is just a small fraction. There are a plethora of factors. Below is a fantastic list of those factors.

Have a look at them.

There are several factors that can affect a country’s forex market. If we would be discussing them all, then probably this article wouldn’t be enough.

But, we can discuss some of them which majorly affect forex. We have divided these factors into two broad categories, i.e. short term and long term.

The political surrounding is the first and significant factor that affects the forex market of a country. Investors usually prefer politically stable economies as political unrest in a country denotes uncertainty about the future of that nation.

The change in political parties plays a vital role in this. If a pro-fiscal growth party wins, then it attracts FDI and investors.

And vice versa, if an anti-growth party wins. Because it is the government that takes crucial decisions, spends money on the country’s growth, and makes favourable reforms.

A good investor always keeps a watch over the political news, events, and announcements of the forex trading country. For example, the UK dollar shifted upwards after the news of BREXIT.

Interest rate decides how much return a lending party would be getting on his investment, i.e. return on capital. The central bank of a country usually decides this interest rate. How it affects the forex market?

The market of a country also plays a crucial role in determining forex trading rates. Stability, demand & supply, prices of commodities, and taxes are some of the market factors.

For instance, if a country relies heavily on beef exports and the cost of beef rises suddenly. Then the currency of those exporting countries would move powerfully against other nations.

For example, gulf country’s primary revenue comes from oil revenue and Norway is also a significant exporter of non-renewable energies. Thus, the prices of these Commodities profoundly affect their forex market.

It is an indirect factor that might affect forex prices. Currency rates are volatile and fluctuate easily by news and events too.

For instance, if there is any speculation that the currency of a particular country would rise, then investors will get attracted to it.

As a result, people will be buying more of that currency, and thus the value would automatically increase.

And the prices would fall if there are any bad speculations for any currency. Therefore, sometimes pseudo speculations are also created to earn profits.

It denotes the rise in the prices of goods and services in a country. Inflation and interest rates both are connected. An increase in interest rate would reduce inflation.

The inflation rate of a country has a massive impact on FDIs and thus on the forex market of that country.

A higher inflation rate is usually not so pleasing to foreign investors because it reduces the purchasing power of the people of that nation.

It means fewer goods would be accessible to the public for a certain amount due to the rise in inflation.

Therefore, a sudden increase in the inflation rate would weaken the exchange rate, and low growth in the same would attract FDI. Eventually, the currency rate would get affected.

For instance, the US had one of the lowest inflation rates in the world and thus attracted foreign capital.

However, it should also be noted that the interest rate is not the only factor affecting inflation. Therefore, only increasing it would not do wonders.

It is usually measured as GDP. Good growth also indicates a lack of any turmoil (stable) in a country, which eventually attracts FDI.

Investors speculate if a country would grow positively or not, based on past indexes and charts. As a result, the currency rate fluctuates, favourably or unfavourably.

A balance of payment is the difference between the value of a country’s exports and imports.

If the imports are comparatively higher than exports than that country’s balance of payment would be at a surplus.

If exports are higher, then the opposite situation happens; and thus the country would be in a deficit

BOP is a significant contributor to forex market price fluctuations. Surplus means a country is bringing more foreign capital by selling its goods to other countries.

Now, everybody starts to think, then why doesn’t the government provide maximum subsidies on exports and bulky taxes on imports.

Then, that country has to face retaliation from other countries for doing so, and in the long term, it ends up giving negative consequences.

Nobody lends money to an organization that is already debt-full. This happens with countries too. The more debt a nation is taking, the more it is becoming less attractive to investors.

Many would also argue that the debt from international organizations accelerates a country’s growth rate. But, when an investor is spending money on forex trading for an extended period, then the country with debt can’t be trusted.

Why can’t be trusted? Because, when the same debt would be returned, there would be an outflow of foreign capital borrowings, which would make the country’s currency weaker.

The unemployment of a country decides how a country is performing relative to its population.

Higher unemployment means more people have no or fewer income sources, which eventually reduces consumer expenditure. As a result, interest rates take a downturn and thus losing investor’s confidence in a nation.

Therefore, higher unemployment means a decrease in the exchange rate and vice versa.

National Policies: You must be wondering how any country’s national policies would be affecting the currency prices! But, here’s a chain you need to understand.

The national policy includes rules, regulations, and taxation policies, which then is directly related to FDI (foreign direct investment). And if a nation is attracting more FDI, then its currency is going to be healthy.

Also, if a strong country like the USA makes a policy against any particular nation, then the other country’s forex market might also get affected. Therefore, the policies are made after so much scrutiny.

Apart from the above-mentioned factors, there are many other factors too. Happening of a catastrophe suddenly, the situation of the capital market, unethical practices, etc. are some of them. These factors also indirectly affect the currency rate of a country

So, these were the factors that affect the foreign exchange rate of a country. If we try to observe and analyze the above factors, it is noticeable that all the game is of FDI.

If a country gets more foreign currency, then its currency bulks up. Consumer spending, export, import, ease of doing business, PPP (purchasing power parity), etc. play a significant role in this.

Now let’s just wrap this up!

Many people say that forex is an uncertain market and totally runs on predictions and speculations. However, it is not entirely true. These factors are the proofs.

Before entering into the trading, make sure you re-read this article. Also, have a proper forex market strategy in your mind, which would help you move up in this forex trading game.

Remember, understanding these factors would help you trade better. Keep an eagle watch over the country’s news, events and surroundings that, in whose currency you have invested.

But From our side,