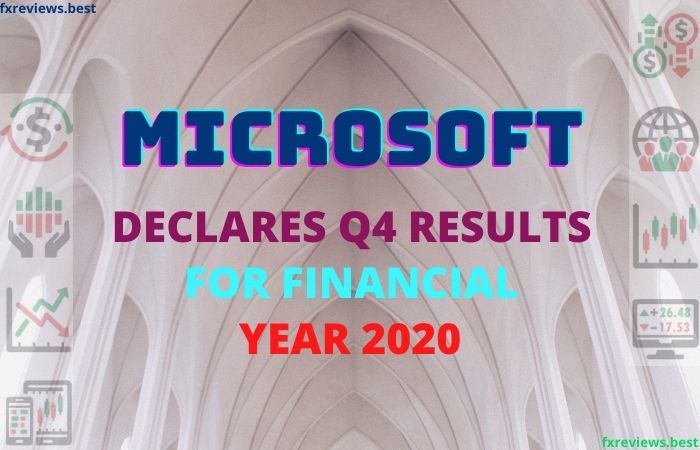 Microsoft Q4 Results declared for Financial Year 2020: One of world’s biggest technological giant Microsoft Corp. declared its fourth-quarter result for the fiscal year 2020 that ended on June 30, 2020. The announcement is in line with the corresponding phase of the previous fiscal year.

Here are The Highlights For The Quarterly Result

Commenting on the announcement, Satya Nadella, CEO Microsoft said that organizations that had the capacity of building digital capability would recover quickly and emerge swiftly from the ongoing crisis. He said that the past 5 five months were a lesson that taught tech intensity would be a key for business resilience.

GAAP Report For 2019 (amount in millions except per share earnings)

After The Adjustment of Non-GAAP

Meanwhile, Nadella emphasized that their company was the exclusive enterprise integrated with modern slack technology which was powered by AI and cloud.

As per the report, the demand for several products increased as people continued working from home during the Covid-19 pandemic. The intelligent cloud segment, productivity and business process, and cloud usage, all witnessed a surge in the requirement.

Subsequently, gaming, surface and Windows OEM got benefitted following the learning, work-play attitude of folks in the personal computing segment. On the contrary, due to the less expenditure in the advertising sector, the search was bullied by a negative impact.

Here are Some of The Business Highlights

More personal computing revenue rose by 14% ( $12.9 billion), which is a 16 per cent hike in constant currency. The operating cost also increased by 13 per cent ($12.3 billion). It also includes the costing led for the closing down of physical locations of Microsoft stores, which was $450 million.

Interestingly, Microsoft offered $8.9 billion as dividends and share repurchases to its shareholders during the fourth quarter of 2020 (fiscal year). It was an increase of 16 per cent compared to the same phase of 2019 (fiscal year).

Adding more details to it, chief financial officer and executive vice president of Microsoft Amy Hood said that for the first time in the year the revenue of their commercial cloud went past $50 billion marks.