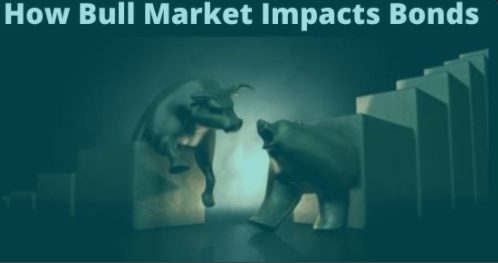 How Bull Market Impacts Bonds: Financial markets are like a vast battleground, where different instruments, assets, sectors, and segments co-exist. However, at the same time, they are into a healthy tussle with each other for fetching investments. Bonds and stock markets are part of the same market scheme but are at loggerheads when it comes to drawing volumes of customers.

Effect of The Bullish Market on Bonds

One of the properties of share markets, ‘bullish market‘ threatens or affects the business of bonds. Although, at a fundamental level, bonds and stocks have always competed to get better of each other. And the history is suggestive of the fact that during the bullish time, the tsunami of volumes possessed by stock exchanges carry away the potential customers of the bonds market.

Due to the descending demand, sellers have to resort to lowering the price of their bonds to lure buyers. Hence, the rate of the bonds won’t rise until they yield a similar risk-adjusting return as stocks. So, it can be deduced that a hike in the equity values would result in the yielding of bonds, while its price may touch the bottoms.

Other Variables at Play

Equity Market alone cannot force its effect on bonds. It cannot inflict its impact without the assistance of an array of variables like rate of interest, sentiments of traders and investors, inflation, the policy of various governments and their regulations, monetary policies, and others to say the least.

The bull market precisely depends on the fundamentals of companies outperforming the expectations. For example, Tesla’s stocks were ranging somewhere $524 per share on January 24, 2020. But until July 23, 2020, it toppled everyone’s expectations and closed the day at $1513.07 per share. Several factors are involved in it, one of them being the company’s overall strategy and approach that led to the swelling of investments in the stocks. It is mostly out of anticipation for the quality of product and plannings.

Fundamental Characteristics of Bonds and Shares

Investors pin their hopes on something they find worthy of huge returns, and Tesla is the perfect illustration backed by a series of successful ventures. The optimism of investors makes them averse to risks when the market turns bull market. However, getting blinded by all the glossy greenery harm in the longer run.

On the other hand, the returns of bonds are lowers compared to stocks but steady. So, in order to compete, share markets have to provide better profits than bonds to sustain at the cost of high perils. So, when the market is in tatters, people tend to invest in safe havens, and what better than bonds.

The same investors chuck equities and bond well with bonds. And as the tide turns, the opposite turns true as well. Traders take a ride on a bull run.

Transformation of Profit and Loss

Like all other markets, one’s loss transforms into another’s profit. It fits well here, as bondholders who are approaching maturity during the decline of bonds prices may not get high returns. Although, at the same time, a buyer purchasing them at a low price might yield better profits in the future.

There are repo rates, reverse repo rates, and other interest rates channelized and obliged by many central banks of different nations. Like the US Federal Reserve would make adjustments in the interest rates, for a brief period to effect some changes. It may be a root cause that may flourish stock markets or for that matter, bonds bazaar.

If the economy struggles, measures like cutting short interest rates take place to stimulus consumption. It also helps in the spurring of loans. The step subsequently drives bonds prices to rise. However, if concurrently stocks markets turn bulls or pick up well, then, in that case, central banks might not interfere in rising interest rates. And that may take a toll on the health of bonds.

For matching the interest rates, bonds may lower their prices to maximize their yielding capacity. Hence the impact of banks like the Federal Reserve and Central play huge roles.

The factors involved in the inter-relation of bonds and stock markets are far more complicated than one might think. Making wild assumptions may not always be possible. There can be a possibility where stocks and bonds rise simultaneously due to the happy times of the economies. There may be interjections from foreign forces like sentiments of investors and rumor-mongering, escalation of cold wars among nations. Those elements mostly grip the collective conscience, and people become wary. Policies of banks and governments may put an effect that can trigger both bonds and stocks against or apart from each other.