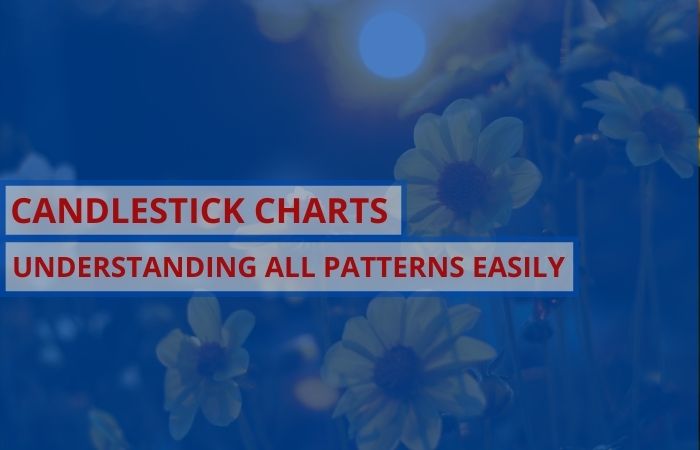 Candlestick Charts is considered a vital tool for technical analysis, which helps in determining the probable price swings based on past patterns. In simple words, it shows the movement of the price of financial instruments graphically in a chart and helps in predicting future price directions.

Originated in Japan, the candlestick is a powerful trading concept. What makes this fantastic tool more potent than traditional charts is its ability to capture the highs and lows of every move. In other words, it can pack more data into a single bar.

Every trader, whether a beginner or experienced, should be aware of this fantastic trend analyzer tool. It not only helps to predict the future price but also tells when to enter or exit the market.

If you’re still unsure about candlestick charts and their patterns, continue reading this in-depth article to understand the topic more precisely.

What Are Candlestick Charts?

Most technical analysts use technical analysis to determine the patterns and trends of an asset. However, some traders find them quite easier to interpret than bar charts. 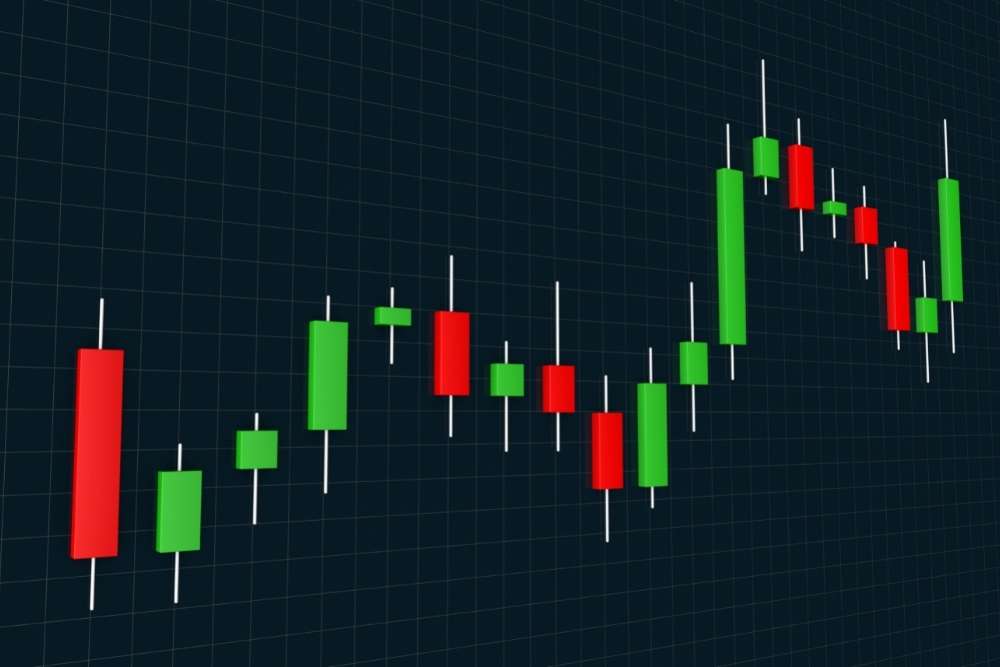 The candlestick chart shows four price points – the highs & lows of the session, the opening price, and the closing price.

There are dozens of identified trends in candlestick charts. Some of them are more popular than others because of their accuracy and reliability. While the complexity of each candlestick pattern is different, we would try our best to make it easier for you to understand them.

It is a two-candle pattern in which the second candle engulfs the body of the previous candle. If we talk about a bearish market, then the engulfing candle comes at the end of an uptrend where a red candlestick engulfs the green one.

Similarly, in a bull market, a green candlestick overshadows a red candlestick. It shows that the market has changed its trend now. The bullish engulfing pattern indicates a surge in buying pressure.

It means more buyers will enter the market and bring the price up further. However, a bearish engulfing pattern is precisely the opposite of a bullish engulfing and indicates the selling pressure where it may drive the prices down in the future.

Hammer and inverted hammer are bullish patterns of a downtrend. The body of the candle is short here with a long lower wick. Did you get why it is termed hammer?

Hammer shows the price rejection of lower prices in the market. It is a sign that sellers somehow took the price of a commodity down. Eventually, buyers were the ones who outperformed here.

Inverted-hammer is the inverse of the hammer, which shows buying pressure followed by a selling pressure; eventually, prices closed a little above than opening.

Hanging men are bearish candlesticks patterns and have the same shape as the hammer. The only difference between the two is that the hanging man appears in an uptrend.

The hanging man pattern is usually seen after a short uptrend, in a downgoing chart. It warns that bulls are losing balance and are about to fall further.

Doji is a situation where open and close prices are the same. It is considered the best candlestick chart pattern. When the momentum of both buyers and sellers is unable to change the price, then a Doji forms.

It looks like a Plus sign and indicates price rejection among the users. There are two types of Dojis: Dragonfly Doji and Gravestone Doji.

A spinning top is an indecisive market pattern where buyer and seller both fight for their control, but none succeeds. It results in a small candle body and a long upper wick. It is similar to a Doji but, here there’s a minor difference between the closing and opening price.

A rarely seen pattern but if seen must not be avoided. The morning and evening star pattern suggests the trend reversal. A morning star is a bullish pattern and forms at the bottom of a downtrend. 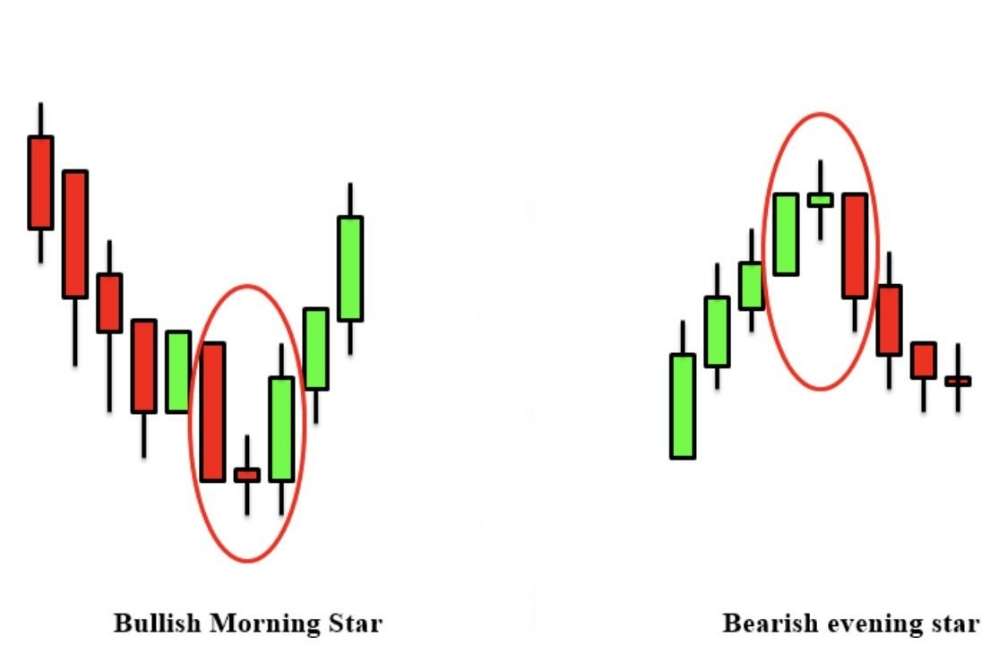 It’s a three candle pattern- the first candle is a long bearish candle, the second candle is a small bodily Doji candle, and the third is a bullish long candle.

Similarly, an evening star is a bearish pattern that occurs at the top of an uptrend, showing a negative sign in the market. It’s also a three candlestick pattern- the first candle is bullish and long, the second is a Doji, and the third is a long bearish candlestick.

It’s a two or more candlestick pattern that indicates a shift in market trend. The tweezer top is a bearish pattern, which appears in an uptrend.

It shows bull prices on the first day, but on the second day, the market reverses and moves straight down, which may result in eliminating the previous day’s profit. Just remember, both candles will be high at the same level.

A tweezer bottom is the opposite of a tweezer top. Hence, it is a bullish pattern. On the first day, it shows low prices throughout the day, but on the second, it moves upwards and shows a reversal trend which covers the previous day’s losses too.

Visually, the second candle must be longer than the first one. Both candles must have the same low price here.

Three black crows are a bearish pattern appearing after an uptrend. It looks like a staircase; each candle should open below the previous day’s opening. The trend indicates the sharp reversal of the market from a bull market to a bear market.

Three White Soldiers is precisely the opposite of Black Crow. It’s the three consecutive long bullish candles, all of the same size.

If the third candle is smaller than the preceding two candles, it shows buyers are not wholly in control, which may indicate weakness. The candles have no or little upper shadow/wick.

Piercing consists of a two-day candle where the first candle is long bearish and the second is a long bullish candle. Remember, the second candle is lower than the first and should cover at least half of the upward body of the previous red/black candlestick.

It’s a bearish pattern where the first-day candle is the bullish and second-day candle is bearish. The closing must be above the opening of the previous candle. It shows a shift in the momentum from the upside to the downside. It shows market prices will go down further.

So, these were the major types of candlestick charts pattern. Reading all of them effectively would help you spot potential opportunities and risks. Moreover, with the help of these, you will also be able to make better entry and exit decisions.

Let us tell you that candlestick charts have gained significant popularity among traders in the last few years, The reason is the extensive information in a single chart. However, traders should not rely wholly on this technical analyzer.

Like any other tool, this also has some drawbacks. Also, the candlestick charts would not prove to be much useful in the short run. But, it sometimes does wonders when you want to invest in an asset for the long run.

After going through this article, if you think you’ve earned enough knowledge to use this advanced tool, open a trading account with a reliable and trustworthy broker just like ABInvesting and start your trading journey.